The problem we are going to address in this post is that of outlier detection, which is the identification of observations that raise suspicions by differing significantly from the majority of the ordinary data. Applications are countless: from fraud detection, to health monitoring or intrusion detection.

Traditionally, the outlier detection problem is seen as supervised learning problem; a binary classification issue where we train a classifier to learn a boundary between the two classes; normal data and outliers. But these types of discriminative models tend to perform poorly, mainly due to the problem of unbalanced data. In fact, outliers, due to their rarity, generally represent a rather small percentage compared to the normal data. This lack of balance between the classes largely compromises the learning. There are several solutions to address this problem such as oversampling or under-sampling of the data before the training but we are not going to address them because they are used in a supervised learning schema. The main reason why we are not interested in the supervised learning schema is to avoid the labor of manually labeling the training data. As we will see later in this post, using a generative adversarial model will help us automate this tedious task.

The remainder of this post will be organized as follows:

Without further ado, let’s get started.

Generative Adversarial Networks (GANs) are a type of neural networks belonging to the class of generative models, as their name implies. They consist of two communicating neural networks: a generator and a discriminator. The generator takes as input a noise and returns a generated sample, while the discriminator’s job is to learn the boundary between generated samples and real samples. Since GAN learn the probability distribution underlying the training data, we can then use them to generate a data point that does not necessarily belong to the training data but it is part of the range of possibilities and thus it can be a novel data point.

This neural networks’ architecture, that was proposed back in 2014 by Ian GoodFellow and others from the University of Montreal, has become the go-to when it comes to image generation, video generation and speech synthesis. But that is not an exhaustive list of its applications. In fact, several attempts have also been made to solve problems regarding outlier detection. One of them is the Single-Objective Generative Adversarial Active Learning (SO-GAAL) model that was proposed in 2019, and which we are going to address in this post. As the code that was originally proposed by the authors of the later paper was written using Keras, with TensorFlow as the backend engine, I decided to re-implement it using PyTorch, so that will be another added value of this post, as I have not found any PyTorch implementations at the time of writing the present post.

The figure below depicts the GAN architecture: 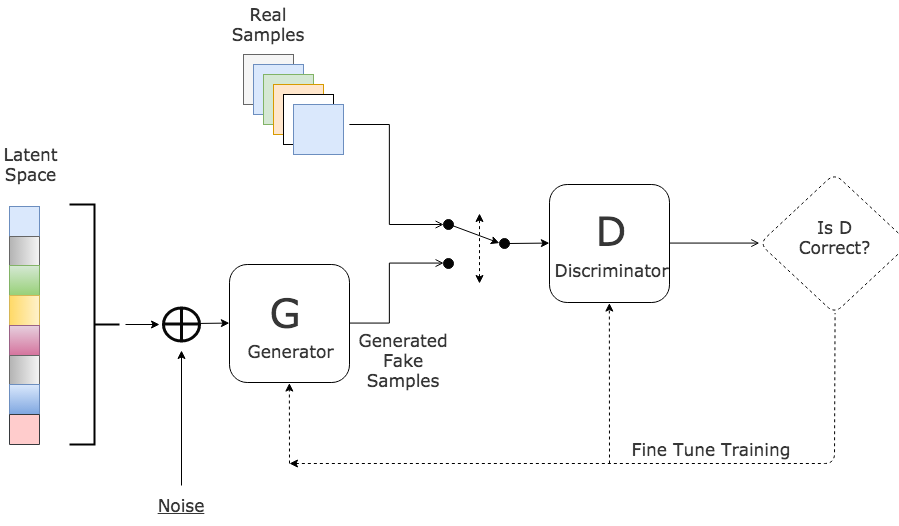 The mathematics behind GANs

For mathematics nerds that are out there, this section is for you. If you are not interested in the mathematics behind GAN and want to jump right into the code, then skip to the next section.

As you may already know, neural networks are optimized using an incremental process called gradient descent. Once the network has performed a forward-propagation, an output is returned, and is used to calculate the cost, defined as the difference between the network’s prediction and the desired output.

The cost functions of both the discriminator $D$ and the generator $G$ are derived from the cross-entropy loss function defined as:

These two quantities; equations (3) and (4), must be maximized in order for the discriminator to triumph. We can combine both of them in one expression, which is called the discriminator’s cost function:

Now let’s focus on the generator parameterized by $\theta_G$. The generator’s job is to fool the discriminator, meaning that it has to get the later to classify each fake sample \(G(z)\) as not fake; \(y= 0\). Thus we can write its cost function as follows:

Meaning that the generator’s objective is to find the best parameters $\theta_{G}$ that maximizes its cost function, thus its optimization problem can be written as:

Let’s stop for a second and try to analyze the relationship between the two cost functions $L_D$ and $L_G$.

We can see that, in the interval $[0, 1]$, maximizing $log(1-x)$ is the same as minimizing $log(x)$. Thus the generator’s optimization problem can be rewritten as follows:

Which is equivalent to:

This means that the generator is trying to minimize what the discriminator is trying to maximize (*). This is called a zero-sum game (if one gains, another loses), and it is what motivates both of the networks to improve their functionalities as the training progresses.

This approach saves us mainly from the problem of unbalanced data that we generally encounter in outlier detection problems. In fact, the percentage of outliers in a dataset is generally very low compared to the normal data, which makes the dataset unbalanced and thus compromises the learning. With this approach, we are making sure to balance between normal data and the generated outliers before training the model, while avoiding the tedious task of manually labeling the data.

As it has been mentioned in the introduction, we are going to train a SO-GAAL model for outlier detection. As an added value of this post, I have decided to implement it using PyTorch, as the original implementation was in Keras with TensorFlow as the backend engine, and at the time of writing this post, I have not found any available PyTorch implementations.

The implementation process will be as follows:

1. Imports and hyper-parameters’ retrieval from the command line

In this phase, we have first to Extract the dataset from the source. In our case, we are going to use onecluster dataset that is available in the GAAL original github repository. This dataset contains 1000 data points, 2% of which are outliers.

And here is a plot of all the data points: 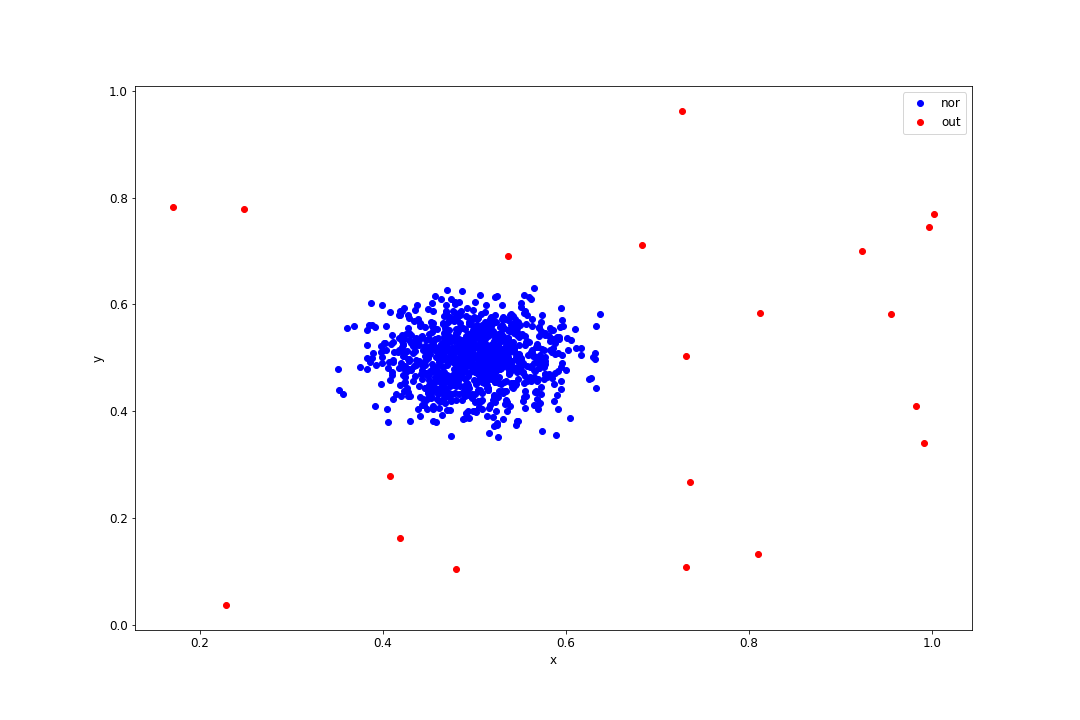 And finally, we have to Load the data into an object to make it easily accessible. For this torch.utils.data.DataLoader is our go to:

The DataLoader combines a dataset and a sampler, and provides an iterable over the given dataset. Concretely, it shuffles the given dataset before it splits it into several batches of size batch_size over which we are going to iterate in the training phase. We drop the last batch just in case it is incomplete.

As discussed earlier, the model will consist of two communicating networks; the discriminator and the generator. As you may already know, every neural network in PyTorch must inherit torch.nn.Module; the base class for all neural network modules, and it must also override the forward() method. I have added a method that will be applied recursively on the network to initialize the weights its layers.

Both $D$ and $G$ are two-layer networks. All the layers are activated using ReLU function, except the last layer of $D$ that squashes the output into a range of $[0, 1]$ using the sigmoid activation function to make it capable of predicting a probability. As far as the other hyper-parameters are concerned, such as the layers’ dimensions, I have kept the same ones as those that were originally proposed by the authors of the GAAL paper in their original Keras implementation.

Now that the model is built, it is time for training. Below are the steps we are going to follow:

The code below is the implementation of these 8 steps. I made sure to document each line so that you don’t get lost:

The metric we are going to use to evaluate the results is the Area Under the Receiver Operating Characteristic (AUC-ROC).

The ROC curve provides a comprehensive view of the model performance at various thresholds settings by plotting the True Positive Rate and the False Positive Rate against each other.

The AUC statistic measures the entire two-dimensional area underneath the entire ROC curve, and thus provides an aggregate measure of performance across all possible classification thresholds. Higher the AUC better the model.

plot is a helper function that takes the training history and produce a summarized plot if the discriminator and generator respective losses as well as the AUC-ROC curve:

Below is the result that I was been able to reproduce from the original code proposed by the authors, available in the github repository mentioned in the references: 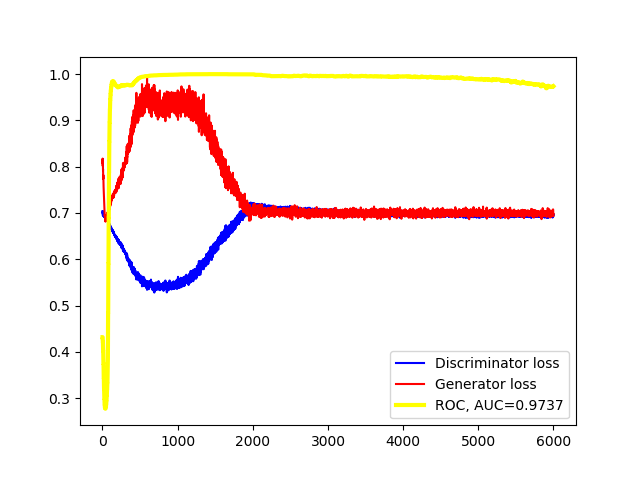 Thank you for making it this far. In this post we addressed the SO-GAAL model to solve the problem of outlier detection. As we have seen, SO-GAAL is a GAN that directly generates informative potential outliers to assist the classifier in describing a boundary that can separate outliers from normal data effectively. We have tested this model on the Onecluster dataset; a synthetic and highly unbalanced dataset. The obtained results are pretty satisfactory, nevertheless, the model has to be tested on real datasets. You can download the complete code (link in the references) and play around with it. As an improvement of the code, there are several features that can be added. First, we can build a run manager to experiment with other hyper-parameters for tuning purposes. Second, we can add TensorBoard support to further track the model’s performance. And finally, training GANs is very time-consuming, especially on modest hardware. For this reason, we can add GPU support to the code to accelerate the learning, since PyTorch allows us to do so easily.

Blog post on how to identify and diagnose GAN failure modes during training.